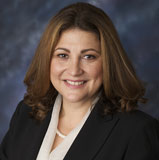 Paula Sollami Covello, Esq., Mercer County Clerk was elected to her third term of office in 2015, after taking office in January, 2006. Mrs. Covello is an Attorney-at-Law, who is admitted to practice in New Jersey (and previously in Pennsylvania and Washington, DC). She spent the majority of her career working in government, first in the Governor's Office as a Policy Advisor and in the New Jersey Department of Education, serving as the first Executive Director of the New Jersey School Ethics Commission, and in the Department's Controversies & Disputes office writing legal opinions. She also previously worked as an Assistant County Counsel member for Mercer County.

As County Clerk, Mrs. Covello has made many positive changes to the Office of the County Clerk. Among these are her implementation of the electronic recording of land records, her work to preserve historic land documents in the Clerk's Records Library, putting an end to a lengthy lawsuit against Mercer County by eliminating a backlog in the recording of land records, and instituted a new computer system with online record search capability. She also, expanded passport services to the Mercer County Connection, Mercer County's satellite office in Hamilton Township, and has taken passport services to various municipalities throughout Mercer County. She has also increased vote-by-mail participation throughout Mercer County by increasing outreach to constituents. Mrs. Covello also offers notary education classes and a class in conjunction with Mercer County Community College on how to search the Public Record room.

Mrs. Covello graduated from Ewing High School and received her Bachelor of Arts degree from Villanova University in Pennsylvania, where she earned a double major in English and Communication Arts. She earned her Juris Doctor degree from New England School of Law in Boston, where she was Editor-in-Chief of her law school newspaper and has written numerous articles and research papers.

In 2009, County Clerk Sollami-Covello served as Section Chief for the County Clerks of New Jersey after being selected by her peers. Most recently, in 2014 Covello was elected Director at Large of the Recorders' Division for IACREOT (International Association of Clerks Recorders, Election Officials and Treasurers) and has also served on the Clerk's Committee for IACREOT for 10 years, where she was a featured panelist on E-Recording at its international conference in 2011.

Her hobbies include swimming, reading, traveling, cooking, spending time with family and cheering on her daughters in various sporting events.