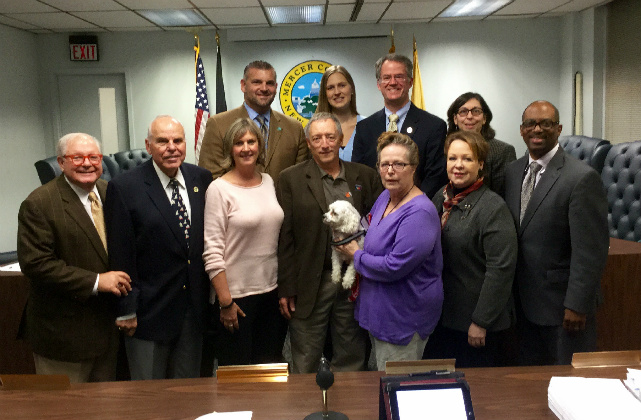 Trenton - The Mercer County Board of Chosen Freeholders unanimously approved a resolution that urges the banning of the sale of "Puppy and Kitten Mill" dogs and cats from pet shops.

The resolution calls on the Governor, State Legislature, and local municipalities to take immediate steps to ban the sale of dogs and cats that come from large scale commercial breeding facilities that are often referred to as "puppy mills".

"This is truly becoming an epidemic," said Freeholder Chairman Sam Frisby. "We have heard testimony and countless stories from residents who have purchased puppies who were given a clean bill of health from a pet store despite having serious health issues."

According to the Humane Society of the United States (HSUS), most puppies sold in pet stores come from puppy mills and the source of these dogs is often not disclosed to the consumer.  Consumers have repeatedly reported cases where puppies purchased from pet stores appear healthy at first, only to show severe signs of illness within hours or days of purchase.

Under the resolution pet shops may only sell dogs and cats that the pet shop as obtained from an animal care facility or animal rescue organization.

"The goal here is to increase transparency for consumers while also transitioning pet shops into a humane model that will give homeless dogs and cats a better chance of finding a home," said Freeholder Andrew Koontz.