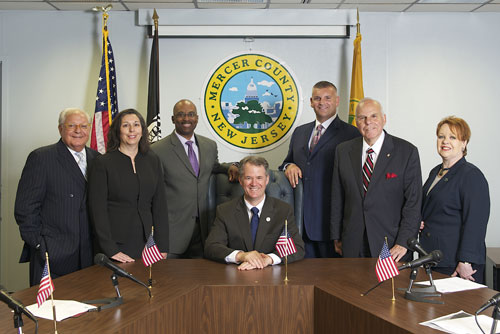 Mercer County Board of Chosen Freeholders recently took their show on the road and traveled to Princeton to hold its November 13 formal meeting. In an effort to increase public awareness and participation in county government, the Freeholders have made it a practice in recent years to hold meetings in area municipalities. "Taking our meetings on the road gives citizens greater access to county government," said Chairman Koontz, who previously served on the Princeton Borough council, "and it gives the Freeholder Board a chance to get closer to the community."

Included on the docket were several resolutions of importance to the local community. The freeholders passed a shared service agreement under the County's "Mercer at Play" program that grants $767,660 to Princeton to plan and construct improvements to three recreation facilities: Mary Moss Park, Community Park South and Valley Road Gymnasium. Also passed was a resolution supporting safety improvements to the D&R Canal Towpath crossing on Washington Road and one urging PennEast Pipeline, LLC to use co-location when determining the route of their pipeline and to conduct a planning process in a manner that is transparent and inclusive of the affected communities.

In addition to the formal business of the County Thursday evening, the Freeholders heard a presentation from Corner House's Executive Director, Gary De Blasio and Director of Clinical Operations, Dave Erickson on the agency's Drug Court Treatment Program for Adults. This program, which provides substance abuse treatment services to drug court clients through the NJ Department of Human Services, is a key to Mercer County's successful drug court efforts and is a model for other jurisdictions across the state and country.

Freeholder Board meetings are normally held at the County Administration Building at 640 South Broad Street in Trenton, the County Seat. Meeting dates may be found on the Board's web site at http://nj.gov/counties/mercer/officials/freeholders/about/when.html and Freeholder Agendas, Adopted Resolutions and Ordinances can be found at http://nj.gov/counties/mercer/officials/freeholders/agenda/agenda.html