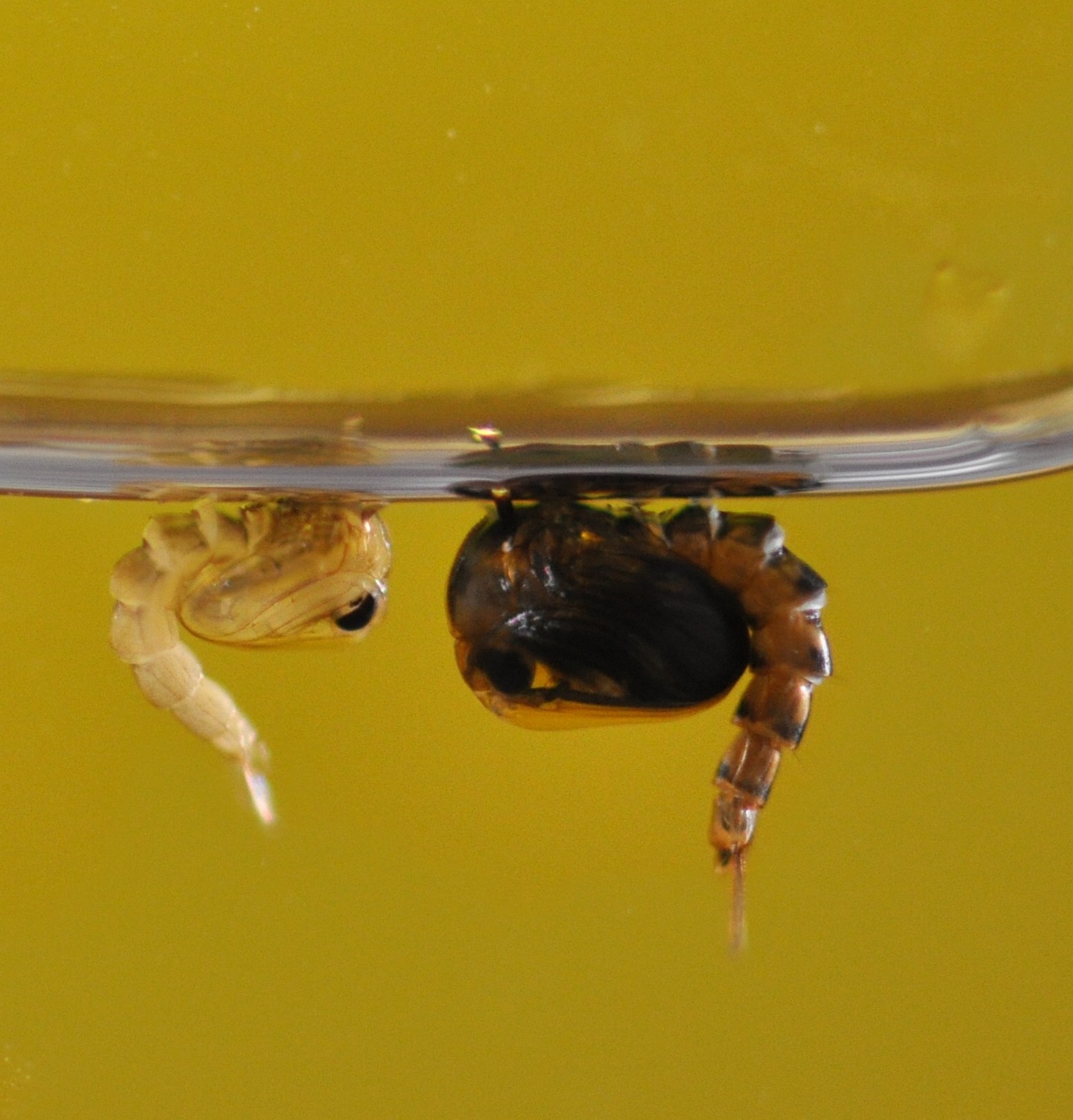 What control efforts are utilized by the agency?

In order to accomplish long-range and environmentally sound mosquito control, MCMC employs an Integrated Pest Management (IPM) approach. This program incorporates many pest control methods including vector surveillance, breeding source prevention and reduction, biological and chemical control, and public education. With an IPM strategy, control efforts focus primarily on the immature, water-borne stages of the mosquito. The immature stages are generally confined to an aquatic microhabitat and are easier to treat since they cannot escape control measures.

The primary insecticide used to control the immature stage is a biorational (a biological pesticide of natural origin that has limited or no adverse effects on the environment or other beneficial organisms) larvacide, which uses bacteria called Bacillus thuringiensis israelensis (Bti) to specifically target mosquito larvae. Mosquitoes feed on the bacteria, which then releases a crystallized toxin that ruptures the larvas stomach and causes death. Another target specific larvacide uses another bacteria called Bacillus sphaericus (Bs) for the same purpose. At times, an insect growth regulator that mimics naturally found hormones in mosquito larvae are used to suspend and damage the developmental stages of the immature mosquitoes. Chemical control measures are also taken by using an organophosphate liquid larvacide on older larvae that no longer feed. A petroleum oil derivative is also used from time to time, which is mainly used as a pupacide in aquatic habitats. As a last resort, a synthetic pyrethroid is used as an adulticide if unusually large numbers of adult mosquitoes are present and public health is threatened. All pesticide applications comply with guidelines recommended for mosquito control in New Jersey by the Agricultural Experiment Station of Rutgers University and regulations set forth by the NJ Department of Environmental Protection.

Biological control measures are also taken by utilizing different fish species to control larval populations in enclosed habitats. The state of New Jersey has established a statewide mosquito fish program that uses resources from the Division of Fish and Game to provide mosquito fish, Gambusia affinis, to counties as needed. In addition to Gambusia, the program also offers other species of fish for mosquito control, including the fathead minnow and two species of sunfish (Bluegill Sunfish and Pumpkin Seed Sunfish).

The agency also conducts year round water management and source reduction projects that eliminate standing water. MCMC has adopted strategies, in accordance with New Jersey Department of Environmental Protection’s Best Management Practices (BMP), to reduce mosquito-breeding habitat by physically managing water flow. This can range from removing logjams and blocks from a waterway, cleaning of detention basins to ensure proper drainage, stream clearance, and environmentally-friendly beaver management. Although most water management activities are conducted during the winter in preparation for the approaching season, management is also undertaken as needed during the summer season. Tire removal has also been incorporated to eliminate another potential mosquito habitat.

What pesticides are used to control mosquitoes in Mercer County?

The majority of the pesticides used are products to control mosquito larvae in the water. However, it is sometimes necessary to use pesticides to control adult mosquitoes. For more information regarding the specific pesticides used, how to avoid exposure and general symptoms of exposure, please refer to the accompanying NJ Department of Environmental Protection approved Fact Sheets.

Where can I find more specific information on mosquito spraying in Mercer County and how will I be notified of the spraying?

The community will be notified of any adulticiding activity in Mercer County, whether by ground or aerial applications, through announcements in two local newspapers (The Trentonian and The Times of Trenton), via the MCMC Hotline (609-530-7501), and also the agencies web site (see above). Any citizen has the right to ask the MCMC for specific information about a planned application in the county prior to the application.

If mosquitoes present a problem in your area, or you would like a site inspected by division personnel, the below contact information may be used.

All complaints and general calls are promptly investigated, with follow-ups conducted to ensure that the problem does not persist.


Free viewers are required for some of the attached documents.
They can be downloaded by clicking on the icons below.