From the earliest days, Trenton was a place coveted for its economic promise. This promise was first recognized early in the eighteenth century by Mahlon Stacy, a Quaker who settled in Trenton and built a gristmill in 1679. He had plenty of business; Trenton's fine soil produced enough grain for every farmer, and every farmer brought business to Stacy. Samuel Green and William Trent (the man for whom Trenton is named) built an ironworks and a forge, and later a mill for cloth. In 1743, Isaac Harrow built a plating and blade mill (on the site of the Old Barracks). Benjamin Bile built a tanning yard, and in 1755, Daniel Cox established his paper mill. Other industries sprouted as well, producing everything from flour to weapons for the revolution.

During the nineteenth century, Trenton produced paper, violins, buttons, leather belting, frying pans, nails, and carriages. There were cotton mills, distilleries, tanneries, and there was also machinery for printing calico. However, Trenton's most important industries were iron, steel, rubber and pottery.

The iron and steel industry has a rich heritage in Trenton, beginning in 1745 when Benjamin Yard bought Isaac Harrow's plating 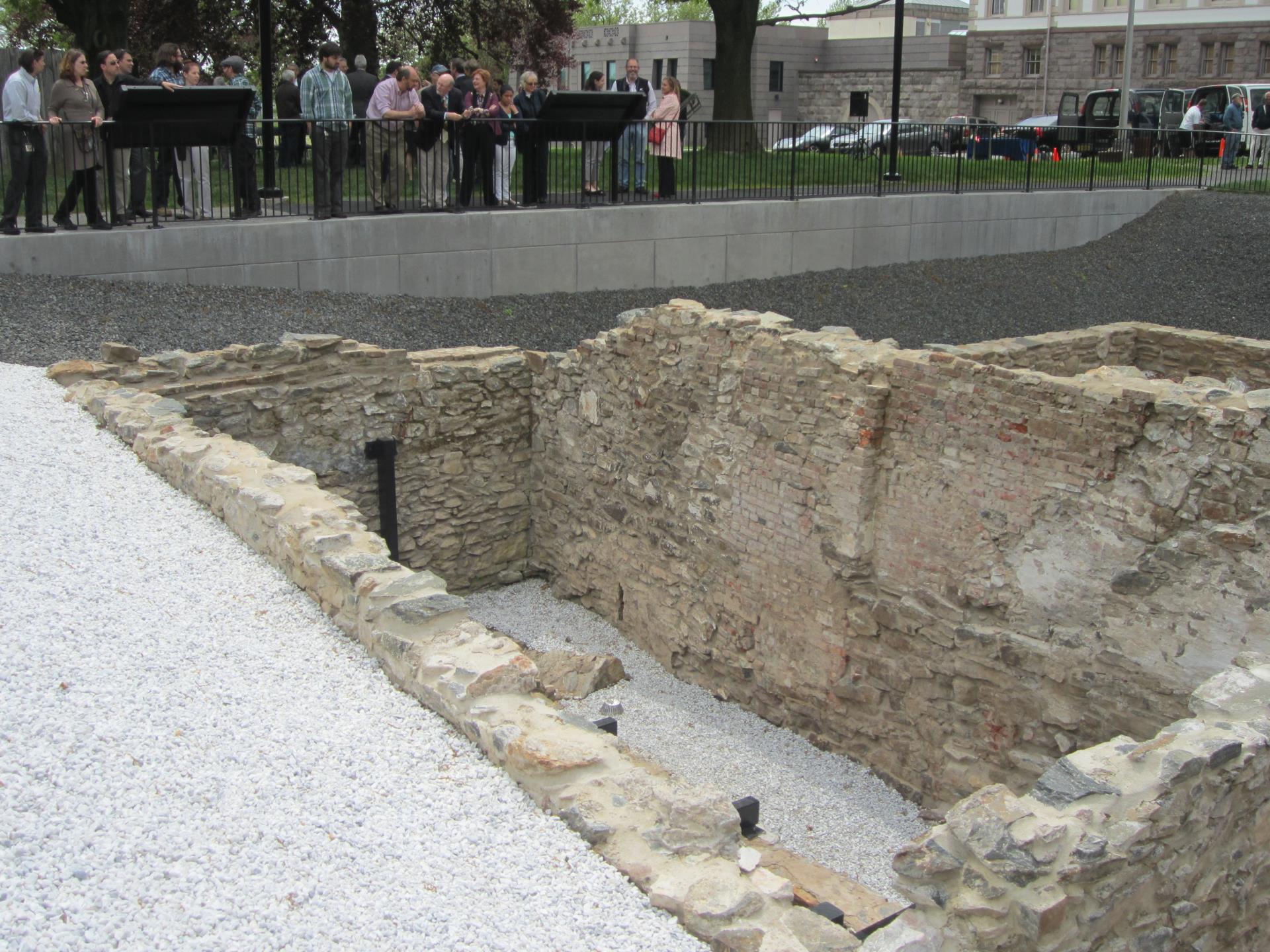 Trenton's debut as a leading industrial center in the world began in 1847. In that year, Peter and Edward Cooper, James Hall and Abraham Hewitt began the Trenton Iron Company. Later, Charles Hewitt joined the company. Cooper-Hewitt's "Universal Mill," the first in America, became the first to roll wrought-iron beams for fire-proof buildings. It made beams for Nassau Hall, the Harper Publishing Company, Cooper Union in New York, and the dome on the Capital Building and the Treasury Building in Washington, D.C.

During the Civil War, Cooper and Hewitt developed desperately needed gun metal, and the company produced the metal for the Trenton-Springfield rifle. In 1848, another turning point in the industrial history of Trenton occurred: John A. Roebling moved his wire rope operation from Pennsylvania to Trenton. Cooper had convinced Roebling that Trenton was an ideal spot for an infant industry. He argued that Trenton's transportation network was excellent, and wire could be bought from the Cooper-Hewitt Plant. Roebling was convinced. He moved very near to Cooper's Iron Company, and his business and Trenton thrived. As it was once said, "As John A. Roebling goes, so goes Trenton." A current day reminder is found in the slogan on a prominent bridge in Trenton, "Trenton Makes, the World Takes."

Roebling arrived in Trenton in 1848, and in 1851 he proposed to build a suspension bridge over the Niagara Gorge. In 1856 he completed the Wheeling Bridge which linked West Virginia and Ohio. Then came the Brooklyn Bridge. Workers had been crossing the East River in ferries for years, as no bridge seemed suitable given the river's condition in the winter when it often froze, and became clogged with ice floes. At the beginning of this project, John A. Roebling was fatally injured. Immediately his son, Washington, took over, but during the initial stages he contracted the bends and was bedridden. He was able to complete the project, however; he gave orders to his wife, Emily, and she directed and supervised at the site. 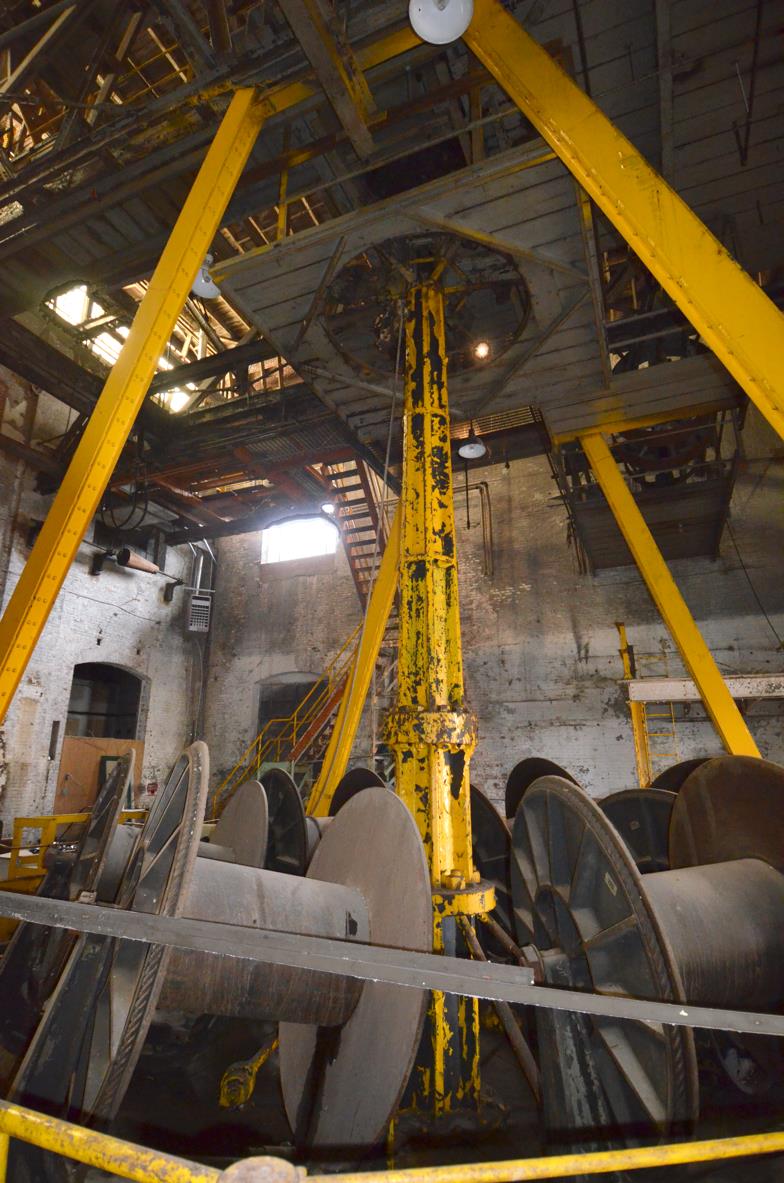 produced materials for the George Washington Bridge and the Golden Gate Bridge. During World War I and II and the Korean War, they produced weapons. One of their contributions was the manufacture of huge steel strands that hoisted 5,000-ton platforms of ocean radar stations upon 150-foot legs. These were used in the Atlantic to provide advance warning of enemy aircraft. One was placed at George's Banks, east of Boston, another near Nantucket Island, and another near Texas. The Roeblings contributed enormously to the prosperity and fame of Trenton, and in turn, all of Mercer County profited.

The other two industries that contributed significantly to the economic health of both Mercer County and Trenton were rubber and ceramics. The rubber industry began in 1850 with Jonathan H. Green's plant. Another early pioneer of the industry was Alan Magowan and his son, Frank. In 1868 they converted the Whitehead factory into the Whitehead Brother's Rubber Company. It was built in 1870, and is said to be the oldest rubber mill in the United States. They formed their own company, the Trenton Rubber Company. Today, it is recognized that McGowan's efforts to advertise Trenton as an ideal spot for the rubber industry greatly aided Trenton's growth and success as an industrial giant.

Trenton was also "the nation's tire capital" at one point. The car's popularity after 1900 encouraged most of Trenton's rubber factories - and there were many - to make tires. However, Trenton reached the peak of its rubber production while manufacturing materials for World War I. At one point, there were eighteen rubber companies in Mercer County.

The Mercer County pottery industry had its origins in Trenton in 1799 when John Stiles McCully opened the first permanent pottery factory. In 1853, Taylor and Speeler began making yellow Rockingham ware, and later added a new line of white ware. In 1872, Thomas Maddock first successfully manufactured glazed earthenware here. It was extremely popular, and it gave Trenton the reputation of being the "Staffordshire of America," after the town of Staffordshire in England famous for its pottery.

In 1889 another new company was formed by Walter Scott Lenox in partnership with Jonathan Coxen Sr. of the Ceramic Art Company. In 1906, Lenox acquired the entire company and began a new one using his name. Lenox, for a time, was considered the best china in the world, and today it is still as famous. Lenox's first big sale went to Tiffany's in New York, and in 1917, President Woodrow Wilson commissioned a 1,700-piece set for the White House. This established a precedent, and Lenox was used by Presidents Harding, Coolidge, Hoover, Franklin D. Roosevelt and Truman. Many presidents since Truman have ordered individual pieces, including an entire set for the White House ordered by President Reagan, to replace the set Truman had. Although Lenox is no longer in Trenton, it is still in Mercer County: Lenox's world headquarters are located on Princeton Pike in Lawrenceville.

In addition to china, Trenton became famous for its porcelain. In 1950, Edward Marshall Boehm moved from Maryland to Trenton and began a ceramics company. Within fourteen years the company had earned a world-wide reputation for exquisite craftsmanship. Already Boehm's porcelains were on display in seventeen museums across the globe. A porcelain eagle by Boehm stands in tribute to John F. Kennedy in the American Embassy in London, and a Boehm figure of a horse and a polo player was given to Her Majesty Queen Elizabeth II and his Royal Highness Prince Phillip, from President and Mrs. Eisenhower.

These many industries gave rise to great economic power situated perfectly off the Delaware River, and almost equidistant between New York and Philadelphia - Mercer County. And because of the growing economic power of the region, the population began to rise as well.

In 1830, the area known as Trenton today had a population of roughly 4,600. The area was the home to many mills including five flour mills, two sawmills, a paper mill, and four cotton mills.

Also joining Mercer's stunning growth in industrial power were 40 iron factories. The area quickly boomed with railway lines springing up to handle the new industries, and a growing waterway along the Delaware that made Mercer County an important port of call for both travelers and businesses.

In the midst of its economic growth, Mercer County played host to newly elected President Abraham Lincoln as he made his way to Washington for his inauguration. By the time Lincoln saw the area it boasted a great deal of industry and economic power. Among the many mentioned above, Mercer was also home to numerous textile factories, clay and pottery establishments, wood and leather working factories, and a growing rubber industry that would soon lead the nation.

In fact, the growth and power of the Mercer industries grew so fast that differences in Trenton, Hamilton, Ewing, and Lawrence Townships were unable to be discerned to the naked eye viewing the ever growing streetscapes. Through the boom years, Mercer County was an important part of the American economy.